The Stuff That Dreams Are Made Of...

I was happily ensconsed at a local cafe this afternoon, sipping my coffee and picking at a slice of quite sublime lemon and ginger cake, when I came across an interview in The Times with some of the Brisbane-ites who were affected by Australia's shocking floods 100 days ago (yes I thought, 'only 100 days' too).

Right in the middle of the first column was a paragraph that really made me stop and think - it went something like this:

Someone said to me 'You should be thankful you're alive.  What you've lost is just stuff', she said.  'But your 'stuff' is what validates you.  Now we feel invaild and invisible.'

When I arrived in the UK over seven years ago, I had planned to be living with the one person I knew and had arranged for the contents of my flat in Melbourne to be professionally packed up and shipped here.  Long story short - he freaked at the 'responsibility' for me coming over here and I moved out after six weeks into a share-house with someone I didn't know. As one does in London...you know the adage 'When in Rome...'

So my 'stuff' (and my dreams) sat in storage.

I moved into my current flat a year later and I cannot even describe the joy of unwrapping MY couch, unpacking MY books, MY music, MY photos and pictures and basically surrounding myself with MY stuff.  It made me feel whole again, reminiscing over things that had been by-the-by in Melbourne but that had suddenly taken on a comforting and joyful nostalgia.  I remember unpacking my stereo, unearthing an adaptor from somewhere and, in the midst of the mountain of bubble wrap and paper wadding, listening to one CD after another: Kylie, Aussie Crawl, Bachelor Girl, Savage Garden, Noiseworks (just in case the neighbours did not realise that there was an Aussie 'in da house') as well as some vintage Madonna, Elton John and Neil Diamond.

And in that one afternoon, it became MY place.  A haven to recover from the knocks I had never expected, and the ones I suspected were still to come.  To catch my breath and take stock of who I was and to assess what I had always thought I wanted.  And to realise that in this 'stuff' lay not only the life I'd had so far but also the building blocks for the new chapter I'd started to write. 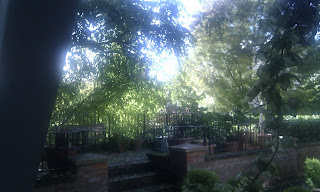 Six years later, I am sitting in my front window, the late afternoon sun is streaming through the dappled leaves and it's lovely and warm on my face.  I've written many more chapters since - the good, the bad and the heart-breaking - mostly ones I never expected I would write.
And I remain resolutely and inordinately attached to my stuff...and dream of the chapters that are still to come.
Posted by Unknown at 17:51

Email ThisBlogThis!Share to TwitterShare to FacebookShare to Pinterest
Labels: All About Me, coffee, expats, home sweet home, Kylie, Life in the UK, starting over, The Times

Kym, this is absolutely beautiful. I know that we're all supposed to not be so attached to our 'stuff', but lots of it holds real meaning to us. Sounds like your belongings enveloped at a time you really needed that. Can't imagine losing photos and special things - why else do I lug them halfway around the world?

Thanks Linda - reading the article in The Times really made me think what it would be like to lose it all like those people had...

Totally agree with this post. Sad to think that we are so attached to physical things, but we are. And thanks for putting Noiseworks songs in my head. (Reach out and, reach out and touch somebody...)

VW, Oh I so loved Noiseworks... No Lies, No Lies