Today I was reading an interesting piece on Fevered Mutterings on what constitutes 'travel' and the premise that we tend to think about the packing of a suitcase, backpack or even overnight bag as an activity inextricably linked to travelling.

When I think of travel, I think of going from point A to point B (which is the definition that comes to my mind given the Transport for London website exhorts me to 'travel by foot' for a portion of most of my journeys) but this is not a vision that will keep me going in the depths of winter darkness. Thank goodness Mike Sowden suggested that redefining travelling as 'venturing somewhere new' means it is right under our noses - that 'travel *is* our own backyard'.

And last Sunday it was my own 'backyard' that I ventured out into to have a gander around Old London Town. I'm not sure that under normal circumstances, I would be up for an architecturally themed stroll on a wintery Sunday morning but I enjoyed Blue Badge Guide Paula's trek around Shardlake's London so much last September that it was an easy and enthusiastic 'yes' when the flyer came through for her guided walk through Post-War City Architecture.

So we started at Barbican tube station and followed Paula - and her post-war story - through the City of London. Here's what we saw...

Following the bombing raid on London on 29th December 1940, much of Greater London was flattened. But contrary to wider plans, the City took its own view of its rebuilding and commissioned architects Chamberlin, Powell and Bon to create urban villages for the working class...

...and the more affluent inhabitants of the City.

We then ambled around the back of the Museum of London, took a quick peek at the Pedway System (a scheme based on raised pedestrian walkways which never really took hold) then crossed London Wall to Wood Street.

Next it was a trot down Gutter Lane to emerge on Cheapside - crossing the road, we found ourselves standing in One New Change with this rather spectacular view...

We headed out of One New Change and down to Bank Junction where the architectural contrasts abounded again.


We headed up Cornhill, our guide Paula setting a brisk pace...


...and came to a stop on the corner of Leadenhall Street and St Mary Axe, finding ourselves both surrounded and dwarfed by edifices of steel and glass...


And not to be outdone, just a stone's throw away stands The Gherkin.

And with that, it was a short walk to Bishopsgate and the end of our tour. Almost 3 hours (including what Paula likes to call a 'warming coffee break' at the Costa Coffee halfway point).

I strolled back towards Moorgate tube station filled with excitement at what a dynamic and fascinating city I live in. The time had flown by and I was so glad that I had dragged myself out of bed and braved the chill to explore this amazing 'backyard' of mine. I kept gazing around, wondering about the stories of the buildings that loomed over me and as I reached the intersection of London Wall and Moorgate again, I couldn't help but take just one last parting shot. 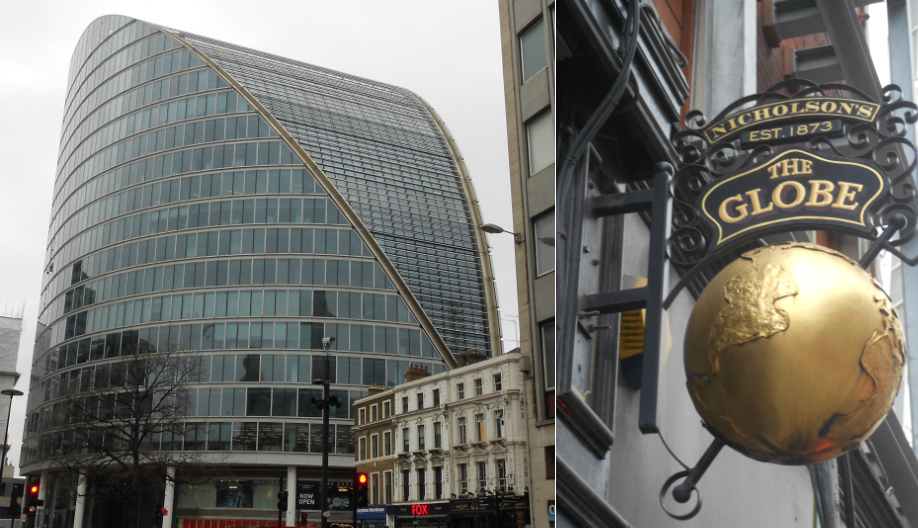 The old and the new right next to each other again.

I don't know their story. But I am sure it's fascinating.