It's July already and the sleeps to go count down will be starting soon. How have you been enjoying your Summer so far? Here in the UK, the festival season is off to a traditional start.

After a rather damp River Pageant to mark Her Majesty's Diamond Jubilee at the beginning of the month (which left The Royal Husband with a urinary tract infection), the pee-ing down continued with the Isle of Wight festival being a bit of a mudbath last weekend, giving all those Surrey-shiny Hunter Wellies the chance for a proper outing.

Speaking of pee-ing, this month's Violent Veg sees the return of Colin Carrot who, having recovered from his brush with danger with the little ones, has this month decided to live life on the edge... 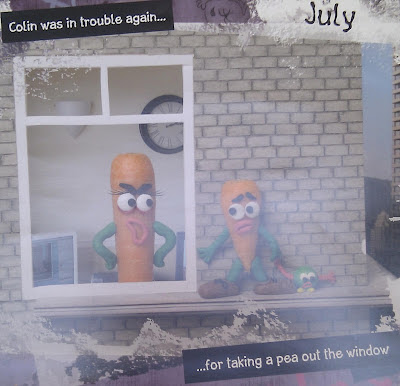 So have a fab July pea-ps!

(Geddit? Pea-ps instead of peeps?)

Oh and there are only 31 sleeps to go...just in case you were wondering...)

Five A Day Back catalogue
June

May
April
March
February
January
Posted by Unknown at 07:00

Email ThisBlogThis!Share to TwitterShare to FacebookShare to Pinterest
Labels: Five A Day, laugh out loud, Life in the UK, sleeps to go, vegetables, Violent Veg, weather

Always love your puns. Realized that when you head back Down Under, you get to hit both Christmas and summer - what I'd call win-win!

This is absolutely correct Linda this year I'll be having a luscious week in Langkawi (Malaysia) before hand. Happy happy joy joy!

BTW I have just discovered my predictive text wants to call you land...go figure