Last night 10 lovely ladies (or as we prefer, hot chicks) gathered to salute the last single days of our gorgeous girl, A-down-the-hill who, in two weeks time will 'I do' and morph from S...d to M....y-dom.  So how does one do this with appropriate pomp, circumstance and little finesse in this day and age?  Well being a bunch of foodies and self-titled gourmands (ie. basically little piggies), we all went cooking... 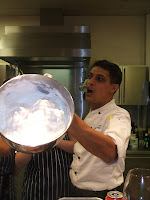 The Underground Cookery School lies beneath St Mary's Church just behind Finsbury Circus and London Wall and allows participants to drink, prepare a 3-course meal, drink, eat the meal they have prepared, drink and...drink.  Last night, under the watchful eye of Missa and Happy (our two chefs) we made tagliatelle, sea bream with roasted potatoes and salsa verde, and souffle.  And let me tell you, it got competitive right from the get-go starting with pretty vigorous dough-making and followed by some serious pasta-machine action.

As with any daunting enterprise (ie. 10 women ranging from mildly tipsy to seriously 'sociable' preparing a 3 course meal that they are willing to eat at the end of it all), an early victory can be quite motivational and cries of success soon filled the room as each of us produced a proud little bundle of pasta ribbons.  So what's next, we asked...

There was sea bream filleting (getting those pesky bones out is more difficult than it looks!) , then tomato-(for the pasta sauce)-and potato-(for the sea bream)-roasting, salsa verde-making (again for the sea bream), Thai green curry prep-ping (for the vegetarians in the group) and finally the piece d'resistance, the raspberry souffle.  But lo and behold, how did that ramekin of salt end up in the saucepan of raspberries - it wouldn't have been one of we enthusiastically helpful ladies who thought it was the sugar that Missa requested, would it??  Just as well Missa had some other fruit 'out the back' so we did not have to go 'souffle-less'.  Dear oh dear... 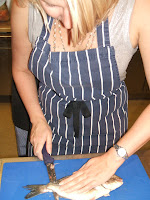 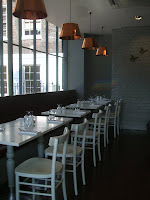 After over 5 hours of underground cookery and a delicious meal (with more wine), we bid our patient chefs a fond and rather noisy farewell and moved on for a cheeky cocktail at Lounge Lover in nearby Shoreditch and a quick boogie-on-down in Beach Blanket Babylon next door before dispersing for home - which for three of us was a rather nice hotel - Club Quarters opposite Leadenhall Market.  We agreed that this had two distinct advantages: (1) it was significantly better than dealing with a long trip home and a large cab fare and (2) it provided a rather fabulous opportunity to continue our festival of foodie fun into a rather scrumptious breakfast at The Modern Pantry in Clerkenwell (see right).  Seriously people, the best coffee I've had for a long time, really yummy scrambled eggs with haloumi, spinach and tomato and then a shared plate of pancakes with berry compote and creme fraiche...you London-ers reading this must go!

So that's the night (and morning) that was - a tribute to friendship amongst fabulous women and a fitting farewell to singledom for our fair foodie friend.

How excited am I...you are back - with two nights and 16 dances a week...wicked!  Brucie's on form, Tess looks great and I'm lovin' the new two night format. Giving the celebs the chance to do a Ballroom and a Latin routine right from the start is definitely 'the goods'...just think, we'll never know what hidden talents all those poor early-exit-ers from the prior series may have had that we never got to see.

So who are my faves at this early stage?  Well here's my top 3:
And about Martina Hingis being the first to go? Honestly, I was not really fussed either way and Len did hit it bang on with the donut-without-the-jam comment (looks great on the outside but a bit disappointing once you get into it) but she was very gracious and kept smiling so good for her.  More gutted about Matt Cutler exiting with her...sigh...

5 days to go until my next fix of sequins, stars and Strictly...how nice to have your glitz and glamour back for a few short months...and looking forward to your brightening up the chilly evenings ahead.

Quickstep Kym
Posted by Unknown at 18:54 No comments:

The Wisdom of Mr Curly...

In 2001, Australian cartoonist Michael Leunig published The Curly Pyjama Letters, a small book of letters between two friends - Mr Curly of Curly Flat and lone voyager, Vasco Pyjama.  Leunig's characters and witticisms had featured for years in the press, yet this book was (and still is) my only purchase of Leunig's works and here's why...

In one letter to his friend Mr Curly, Vasco bemoans the world he finds on his travels and poses the seemingly unanswerable question "What is worth doing and what is worth having?"  to which Mr Curly replies: 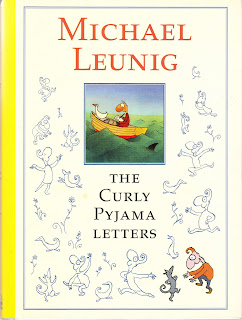 I believe the world is sick with exhaustion and dying of restlessness...Tiredness is one of our strongest, most noble and instructive feelings.  It is an important aspect of our CONSCIENCE and must be heeded or else we will not survive. When you are tired you must HAVE that feeling and you must act upon it sensibly - you MUST rest like the trees and animals do.

Yet tiredness has become a matter of shame!...Tiredness has become the most suppressed feeling in the world. Everywhere we see people overcoming their exhaustion and pushing on with intensity...and being congratulated for overcoming it and pushing it deep down inside themselves as if it were a virtue to do this...We live in a world of these consequences and then wonder why we are so unhappy.

So I gently urge you Vasco, do as we do in Curly Flat - learn to curl up and rest - feel your noble tiredness - learn about it and make a generous place for it in your life and enjoyment will surely follow. I repeat: it's worth doing nothing and having a rest.

Back in 2001, having ended every work week in exhaustion only to face a commitment-filled weekend stretching ahead of me, this struck such a chord.  I have just started on a two month project in digital media, a sector entirely new to me, and I have spent three days brimming over with the thrill of learning something new and the joy of making things happen...but my head is full and and my whole self tired.  So this reminder about being generous with myself is timely and this weekend...

I am going to do nothing

Today was a not-so-brilliantly-sunshine-y day in Kingston, and while this was disappointing, the grey clouds did nothing to dampen the spirits of four lunching ladies on Kingston Hill.

It has been a while since I've entertained with such gusto but this afternoon was a leisurely 4 hours of eating, drinking and girlie gossip under the trees and my guests left replete with good cheer and I do believe that there was even a little waddle or two going back down the hill.

There was also a little surprise guest who had invited himself along and managed to engage the ladies with his sparkling eyes and disarming smile...but he left soon after, disappointed with the lack of honey fare and bear-y conversation... 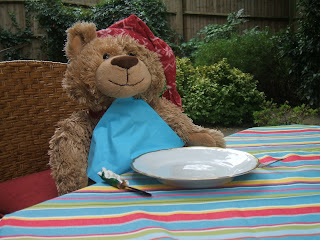 What a cutie...I wonder where he will turn up next?
Posted by Unknown at 19:50 No comments:

Well today I took my first step towards my official settlement here in the UK by passing the 'Life in the UK' test - 24 multiple choice questions over three quarters of an hour - which I managed to complete in about 5mins!  Hooray for me...

Now all I have to do is collect 5 years of bank statements, document my travels in and out of the UK over the last 5 years - which is quite a lot given the travelling I've done for my various jobs - acquire two passport-sized photos (Sainsbury's photo booth, here I come!), fill in the application form (19 pages), pay £820 and wait...

I have been feeling quietly nervous leading up to today's test, in retrospect more than it seemed to warrant.  But it is really unsettling to think that I've worked hard and built this wonderful life for myself here in the UK and my future here lies in someone else's hands.  Only time will tell I guess but let me just say that I will be so thrilled to get my ILR (Indefinite Leave to Remain) status sorted...
Posted by Unknown at 16:04 No comments: