You know I love London. And you know I love a walking tour. So you may not be surprised that last Sunday I was up and out early-ish to join one.

This is my third walking tour with Blue Badge guide Paula Cooze, the first being a wander through the City in Shardlake's Shoes last September and the second exploring the City's architecture from the Barbican to Bishopsgate in January this year. This time there was a wander around the globe to look forward to...Shakespeare's Globe that is...so I trundled tube-style down to London Bridge Station and ambled over to our meeting point at the theatre. This is what followed... 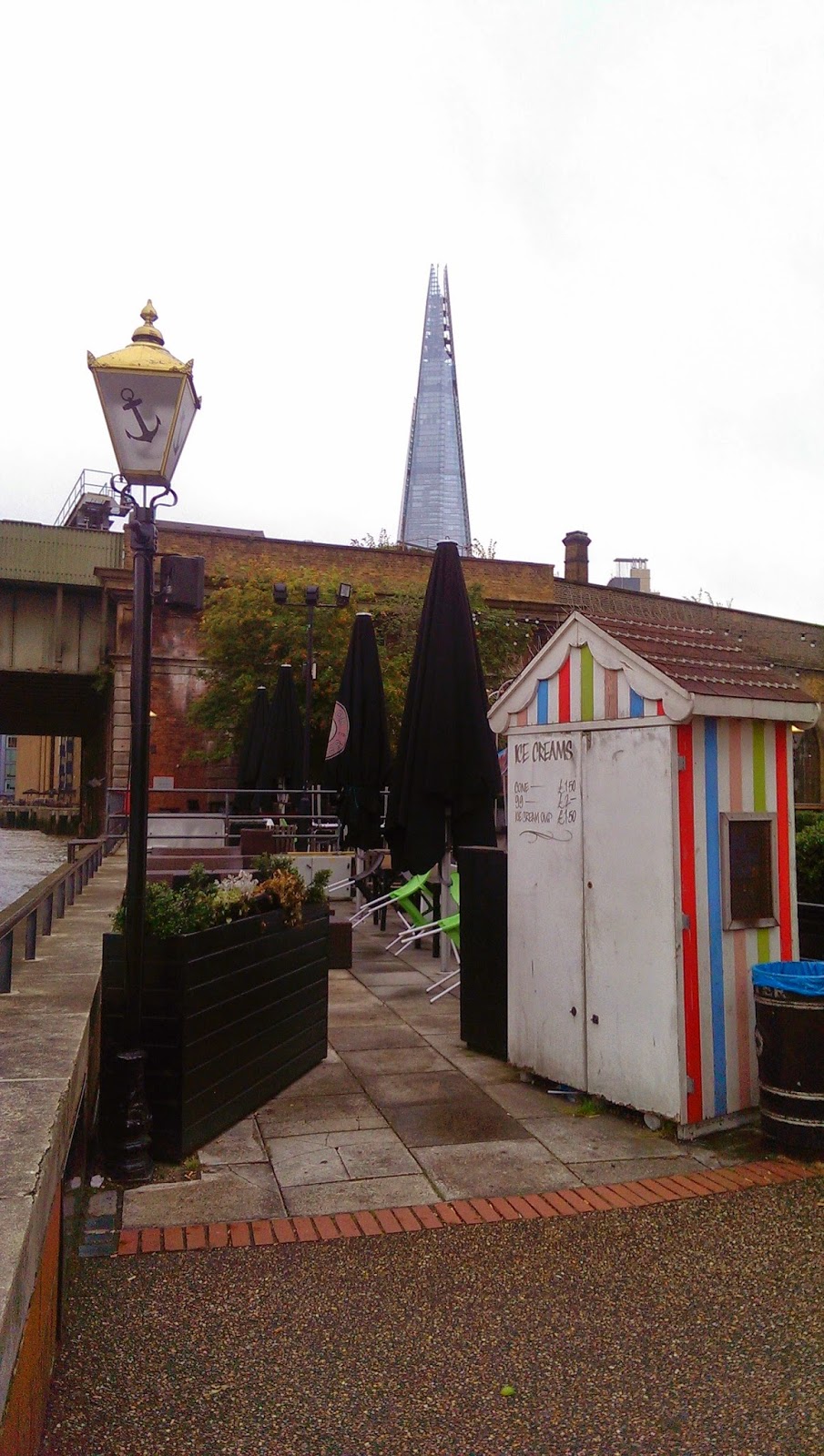 You are right. This is not the Globe theatre but it's right outside The Anchor pub on the river bank. As I was waiting for the appointed start time to approach, I found myself quite taken by this quaint, quasi-seaside scene with The Shard looming in the background. 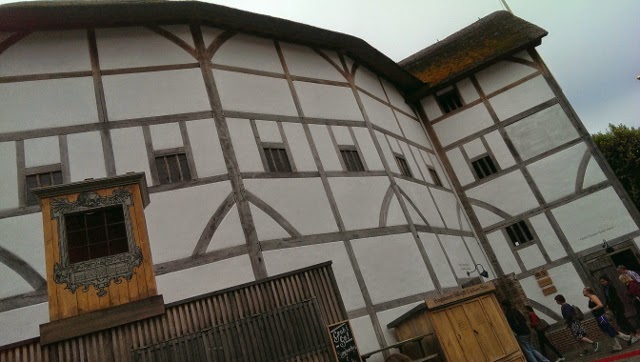 It is said to be a faithful reproduction of the original - while no plans were ever available to study, local archaeological sites have revealed clues which have been used to make this version as authentic as possible.

This is the original site of the theatre: Old Theatre Court in Park Street, about 230m away from the current replica. You can pay close to £2,000/month to live in a 71 square metre, one bedroom apartment here.

Speaking of money, the rebuilding of Shakespeare's Globe would not have been possible without Sam Wanamaker, an American actor and director who set up the Shakespeare Globe Trust in 1970 to rebuild the theatre. The contributions of those who made this possible are celebrated in the paving stones in the theatre courtyard whilst the candlelit theatre that opened next door last year - the Sam Wanamaker Playhouse - honours the man himself.

Our next stop was the former site of the Anchor Brewery further along Park Street. 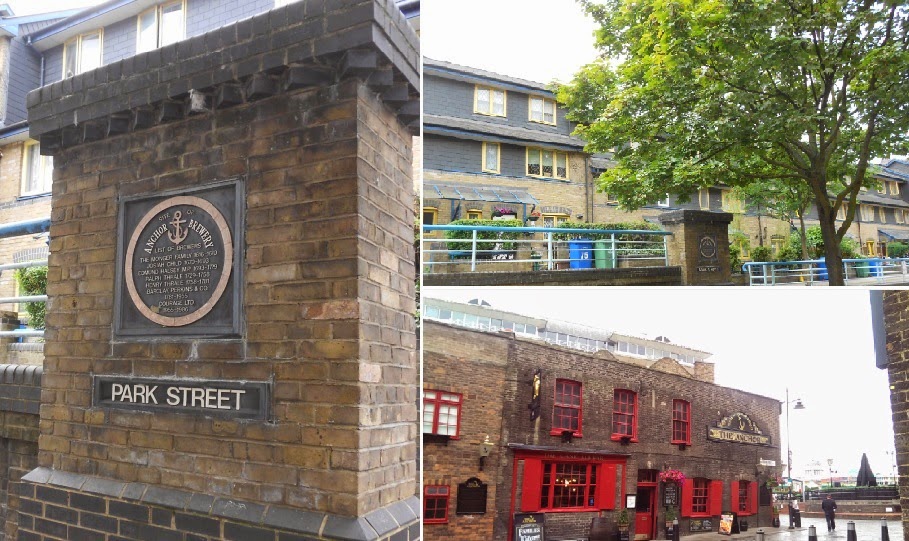 Built in 1616 by James Monger, the brewery grew to be the largest in the world in the early nineteenth century. After a succession of owners and a merge with Courage in 1955, the brewery itself was pulled down in 1981 to be be replaced by council estate housing (top right).

The Anchor Tavern (bottom right) still stands in its Bankside location nearby and history marks this site as having had a public house on it for 800 years. Aside from some reputedly excellent fish and chips, it has played host to Tom Cruise and Ving Rhames in the closing scenes of the movie, Mission Impossible.  And if you turn around and look across the river, you'll see just why Samuel Pepys wrote of sitting at 'this alehouse' watching the great fire of London...

Around the corner and though the arch we walked to stop outside The Clink.

The Clink was a notorious prison in London and operated from twelfth century through to 1780. It was part of the estate of the Bishop of Winchester (you can see the remains of his palace a little further down the lane) and originally housed prisoners who held views opposing those of the clergy. Profiteering was rife amongst the wardens who sold food and 'better' lodgings to those who would pay and to facilitate this industry, prisoners were released to beg during the day and earn 'their keep' at night. It later became a debtors prison - thus the reference to Dickens' tale of Little Dorrit above. It is now the site of The Clink Prison Museum so you can still pay for the privilege of a visit.

At the end of Clink Street, past the remains of Winchester Palace, stands the replica of Frances Drake's Golden Hinde. 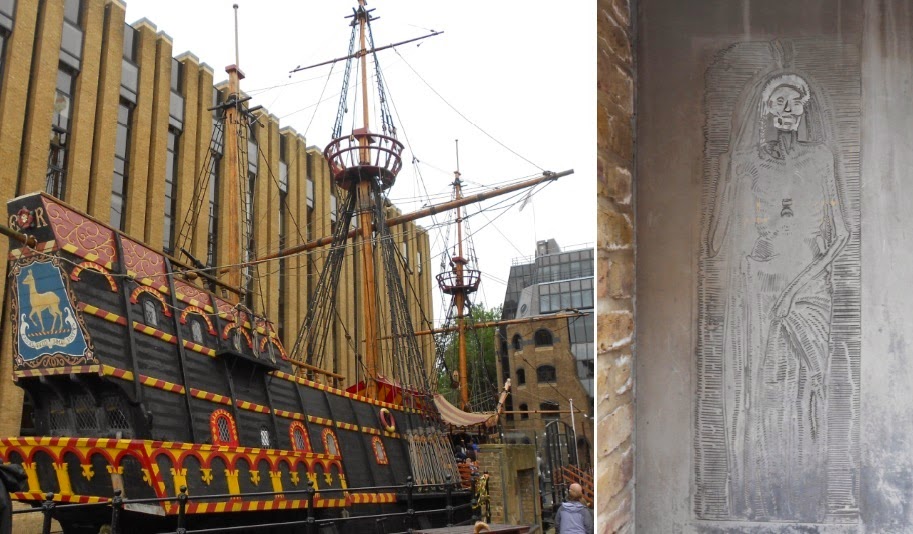 I have blogged about both the palace and the ship before so if you'd like some Gidday witterings on these, you can click here. What I really want to share with you is the legend of Mary Overie (Mary over the river).

Long before there were any bridges to get you across the Thames, ferryman John Overs made his fortune by monopolising the shipment of cargo and people from river bank to river bank. Being incredibly tight-fisted, he had refused to pay the dowry for his daughter Mary to be married to the man she loved. In fact he decided that if he pretended to be dead for the day, his family and servants would mourn and their fasting would save him the cost of food. Wrapped in a burial shroud and lying silently in a coffin, he was dismayed to find that instead of going to plan, his servants were delighted by his demise and celebrated by unlocking and helping themselves to the pantry. Finally he could lie still no more and arose ready to admonish his staff - but one such servant, thinking him to be a ghost, struck him over the head with an oar and killed him.

Mary wrote to her beloved that they were free to marry but tragedy struck when his horse stumbled and threw him en route to her, killing him. Mary refused all other offers and instead formed the priory of St Mary Overie where she lived until her death.

Always something new for me to learn on Paula's tours.

Anyway, on to the next stop just around the corner - Southwark Cathedral.

Some have placed the foundations of the building as far back as 606 but the more commonly held view is that it has been in existence since the conversion of Wessex in 886. The site has undergone many iterations over the centuries with the photo to the right showing the different levels of pavements and thoroughfares (as well as a coffin). Southwark Cathedral was even named in the Domesday Book of 1086.

We dived into Borough market next, ghostly quiet without the hustle and bustle of its Wednesday-to-Saturday trading.

As we emerged from the labyrinth of empty stalls, we came across yet another famous Globe but from the modern era.

Leaving the market behind us, we walked down Southwark Street past the Hops Exchange... 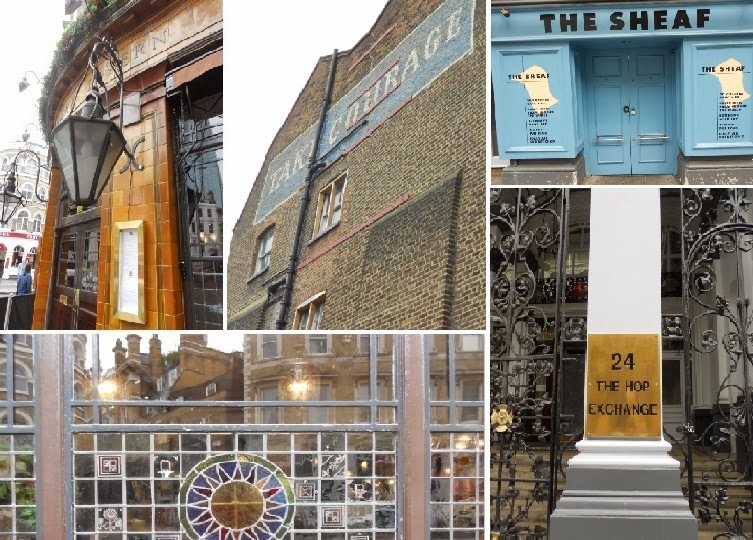 ...and crossed into Redcross Way to our next stop, the Crossbones Graveyard.

This site started out as a medieval burial ground for the area's prostitutes and by the 18th century had become a paupers' graveyard which was then closed in 1853. There were excavations on this site during the 1990s, carried out as part of the extensions to the Jubilee Underground line which unearthed the bones of the dead in 148 graves. The local community in campaigning to create a permanent memorial garden, continues to add to the poignant memorial created along the fence and holds a memorial vigil at the gates at dusk on the 23rd of each month.

Turning back we crossed back over Southwark Street and rejoined Park Street, coming to our penultimate stop... 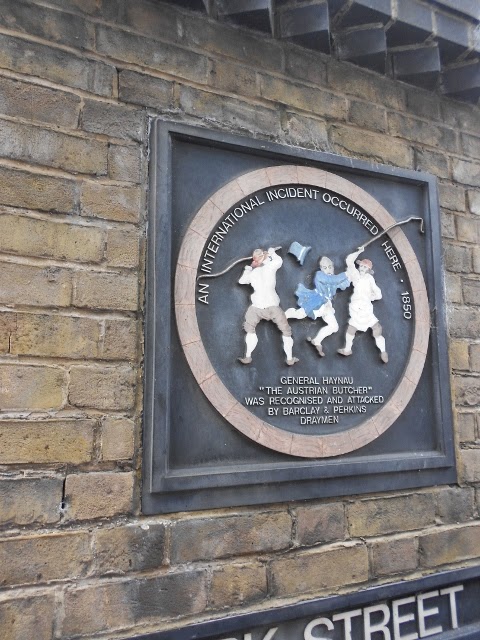 This plaque shows two draymen beating Julius Jacob von Haynau, an Austrian general who was well-known for his brutality in suppressing insurrection. This particular incident happened following several narrow escapes of mob violence when von Haynau was High Command of Hungary, with the two men setting upon him during his visit to the Barclay and Perkins Brewery (previously the Anchor brewery). Let's just say that the protagonists were very much lauded for their 'chivalric' pursuit of justice in the realm.

And then we wandered around the corner to find ourselves back at The Anchor and the end of our tour. It was such an interesting two hours, full of fun stories and historical titbits that, despite having explored this area before, I did not know about - and you know how I like discovering London like this. The really amazing thing is that when I look back on where we walked, it wasn't a large area and I was left in awe of how historically rich this city is. 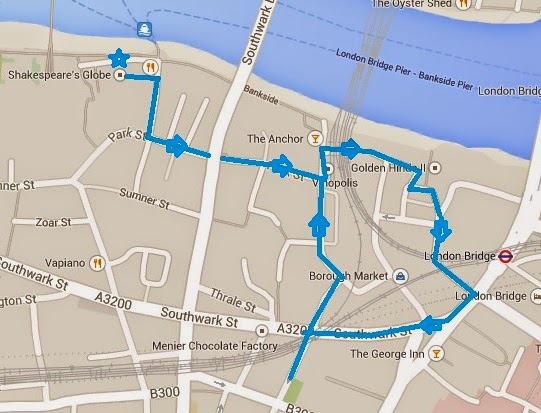 It's July. The schools are starting to close for the summer break and thousands of families are packing their bags for their annual holiday. Many flee to sun themselves and swim in warmer climes although the UK's recent burst of gloriously sunny weather may have also inspired some vacation-ing closer to home.

At this time of year, an email is circulated at work, encouraging us to be safe and take care over the months ahead. There are the usual admonishments to drive safely, to stay vigilant outside our normal routines both in and out of the work environment. This year's message really struck a chord for me.


The new captain jumped from the deck, fully dressed, and sprinted through the water. A former lifeguard, he kept his eyes on his victim as he headed straight for the couple swimming between their anchored sportfisher and the beach. “I think he thinks you’re drowning,” the husband said to his wife. They had been splashing each other and she had screamed but now they were just standing, neck-deep on the sand bar. “We’re fine, what is he doing?” she asked, a little annoyed. “We’re fine!” the husband yelled, waving him off, but his captain kept swimming hard. ”Move!” he barked as he sprinted between the stunned owners. Directly behind them, not ten feet away, their nine-year-old daughter was drowning. Safely above the surface in the arms of the captain, she burst into tears, “Daddy!”  Source: http://mariovittone.com/2010/05/154/

It would appear that drowning is not the waving, splashing, attention-getting event that we think it is. It is quiet, insidious and quick. It can happen in less than 60 seconds...while we watch. Mario Vittone oversees the development of maritime safety and security products for VLinc Corporation and is a leading expert in drowning, sea survival and safety at sea. He consults and writes on water safety and in 2012, he published the article referred to above, painting a vivid picture of the risks we run as a result of our misconception about what drowning looks like.

In the 1970s, Dr. Francesco (Frank) Pia Ph.D discovered The Instinctive Drowning Response shown in the video below.


The misconceptions remain some 40 years later.

I grew up in a culture where swimming is taught if not in parallel with learning to walk, then at least as part of every primary school's Phys.Ed. curriculum. And we learnt not just to swim but also to rescue and perform CPR as part of the higher swimming competency certificates in later years.

There is also a legacy of swimming in my family with my grandfather and uncle being swimming coaches and Mum swimming at State level for many years during her teens. Growing up we had pools in our various back yards and seaside holidays galore with many hours spent frolicking in the surf with Mum or Dad close by. My sister and I competed at swim meets both in and out of school and as I grew into adulthood, I spent many weekends with friends water-skiing and swimming in bays, rivers and lakes around Victoria.

Yet I carried the same misconception as many of you probably do. I never knew what drowning really looked like.

So with the Summer months gaining momentum in the northern hemisphere, it's vital to get this message out there, to wave my virtual arms and make some noise on behalf of those who can't.

Drowning is a quick and quiet killer and by knowing what to look for, you just never know whose life you might save.

So please share this post or any of the additional material below with as many people as you can.

The life you save may even be yours.