This time last week I was arriving at Heathrow Airport after a 9 day soujourn with Seattle-A and all of her boys.

You see, I'd managed to tack a few flights onto the end of a work trip so after about 7 hours flying (and a rather tight connection dash through Houston Airport en-route) I arrived at Seattle-Tacoma Airport on a warm evening in August to be hailed by a fond Coo-ee! and Seattle-A hug at the luggage belt.

It'd been about 6 months since my last visit so there was loads for us to catch up on over a burrito and a gin and tonic on the way home. There are so many changes happening in both of our lives - she as a second-nation expat and mother of twin boys and me as somewhat of a jetsetter in my new (since last October) job - but the feeling of picking up where we left off last time remained.

It was an unexpectedly busy first few days as a) Grandma-C was enjoying the last few days of her very own Seattle sojourn and b) I was invited to accompany Team-M on a long weekend in Walla Walla in Washington's wine region under the auspices of celebrating a friend's 40th birthday. Hmmm more travelling...but made palatable by wine and friends at the end of it.

Returning from our weekend away, I was left with a few days to hang out at Chez-M, plenty of opportunity for a cuddle top-up with my favourite little dudes and to soak up some Seattle-A time to sustain me until my next visit.

On my penultimate day, this included a trip to the Evergreen State Fair.

There was some discussion between Seattle-A and I beforehand as to what format this would take compared with our Aussie experiences - pavilions, rides, shows or lots of livestock to stand around and 'admire' outside. As it turned out, it was a bit of everything plus some fair 'fare' so here's a quick scoot around the fairground for your armchair touring pleasure.

There was not one but two ferris wheels... 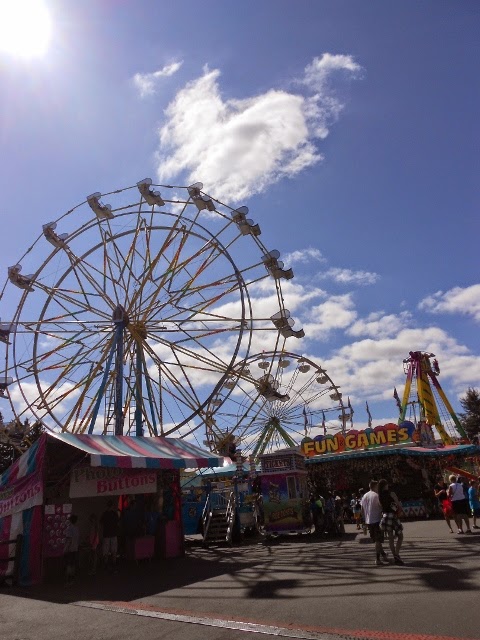 ...and there were rides and games and plenty of vittels...

...although the Snohomish Pie Company (above bottom right) sold only sweet pies much to our disappointment. This turned into an important cultural lesson as the locals in our group laughed at our 'uniquely Australian' expectation of a savoury Snohomish slice.

We soon got our own back. 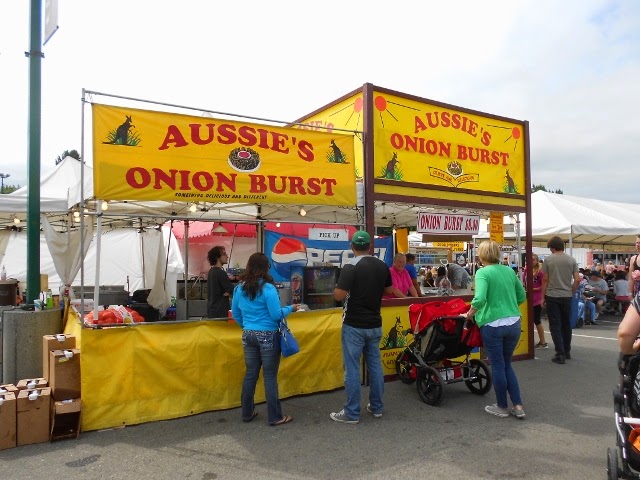 Seattle-A and I were rather curious about this apparently Australian delicacy, a large onion peeled, flowered and floured before being deep-fried. Upon interrogating the purveyor of said goods, we learnt that there was no Down Under connection at all. Nor did we find out who 'Aussie' was.

After a quick reconnaissance we were soon tucking in to some local vittels of our own... 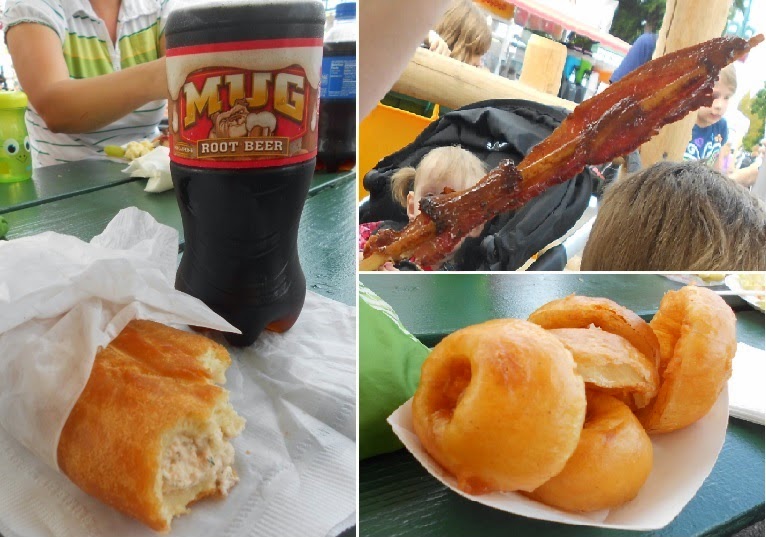 The top right photo shows bacon on a stick. Yes that's right - bacon - on a stick.

To the left is my lunch: a bottle of root beer (seriously I could not get enough of this stuff - anyone who can tell me where I can buy this in the UK will earn my eternal gratitude) and an all-American Russian piroshky. The lady was making these by hand when I approached the van so it was a salmon and cream cheese one for me and a meatier version for Seattle-A - delicious!

Soon it was time for a little more wandering and while we were searching for the petting zoo (the main agenda for our visit), our little group was waylaid, this time by ice-cream. Seattle-A was delighted with her Chocolate-Almond choice and was looking forward to devouring the whole lot... 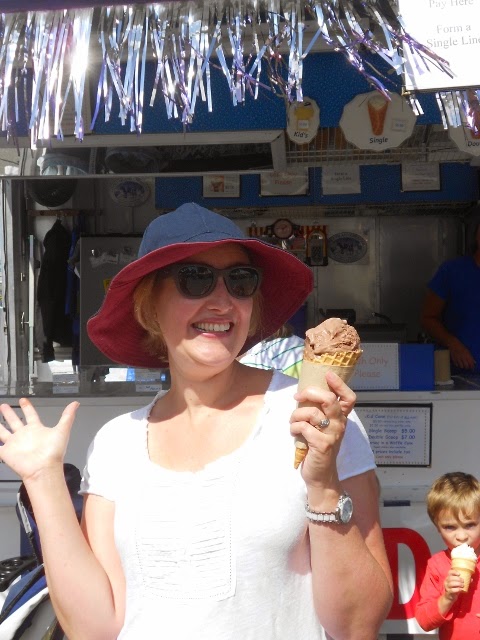 ...but the little dudes, particularly R,  had other ideas. 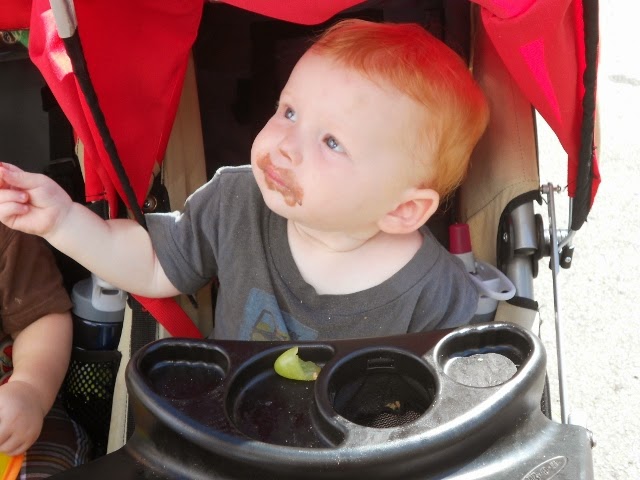 And I can't say I blame them - the couple of bites I had were divine! 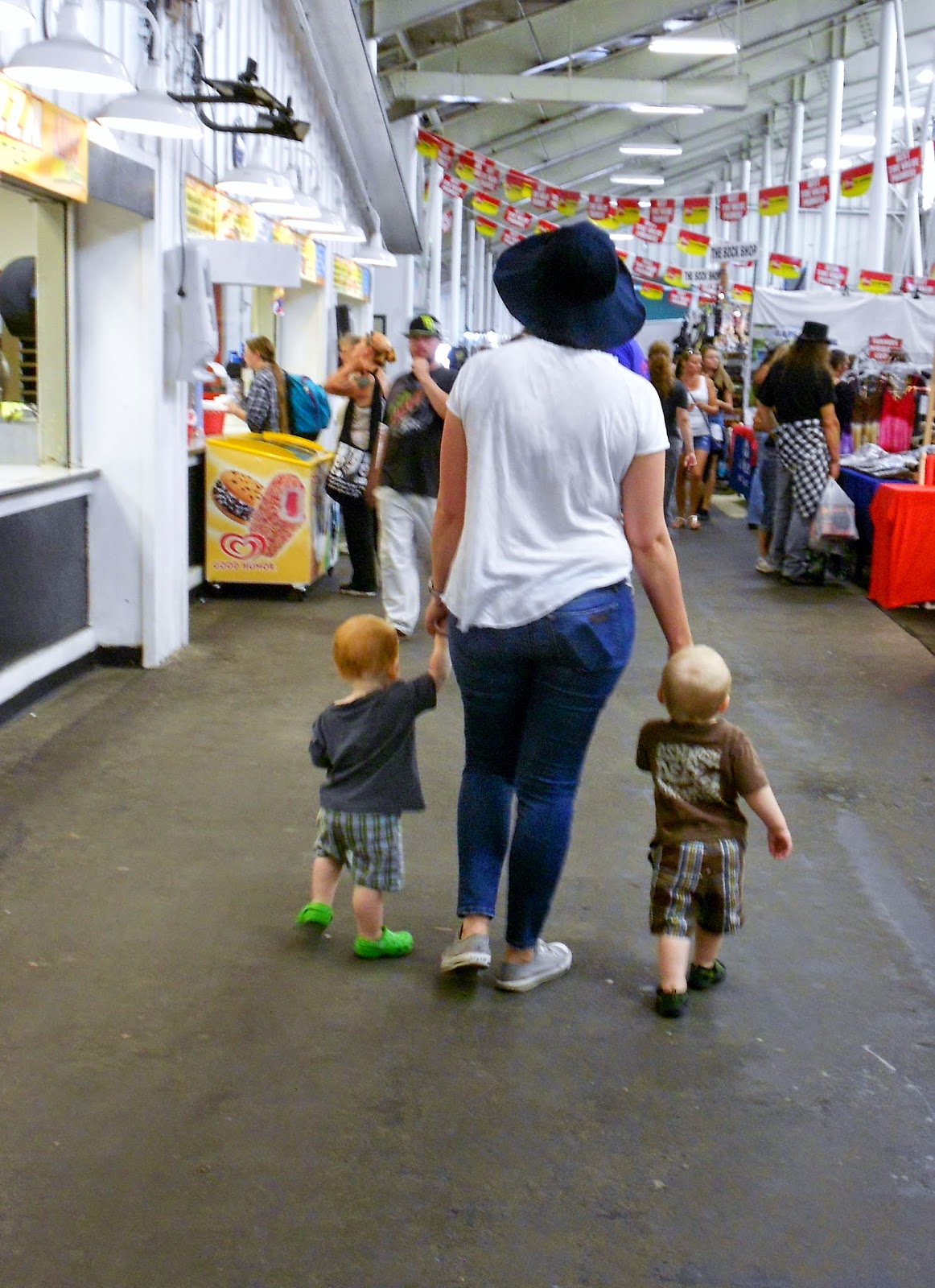 ...and before long we found ourselves near our destination, these wooden creatures greeting us as we approached the location of said petting zoo. 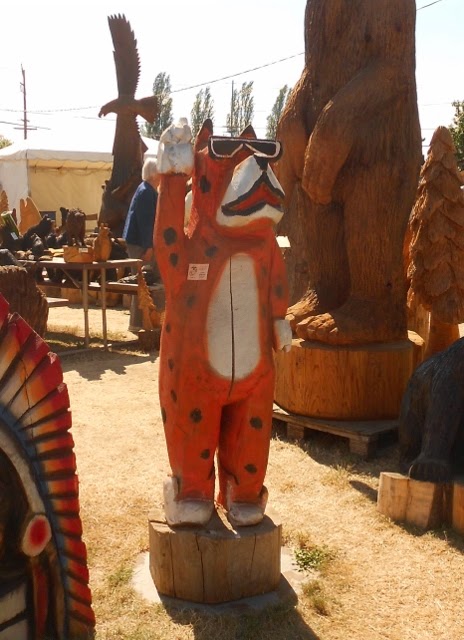 With bears in the Chez-M area - neighbours report ursine visitors ransacking garbage bins under cover of darkness - we thought the ones below would look great scattered through the trees surrounding Chez-M but were unsure as to whether they would attract, repel or even 'upset' the real thing. 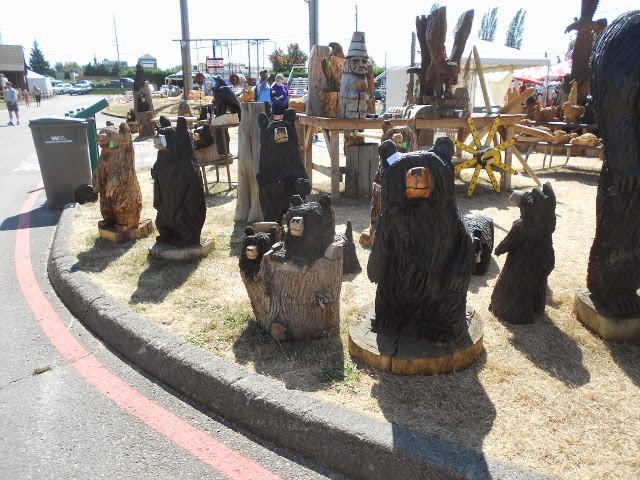 Speaking of locals, we were also treated to a display of indigenous colour and rhythm here so the little 'uns in our party did a bit of tribal foot-stamping to the beat of a native drum. 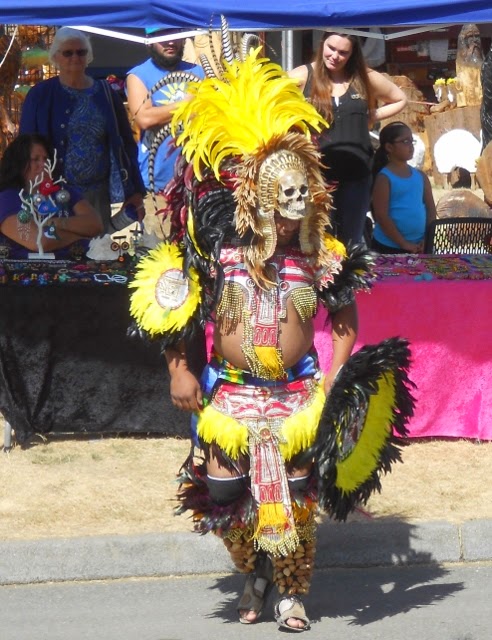 Finally, we made it to the zoo.

Hooray I hear you say.

O (left) was not entirely sure of the competition for Mum's attention...

....but R (right) was fascinated by these real-life creatures previously only seen in picture books.

So that was our big day at the fair. A hot, blue-sky day filled with new experiences for the young... 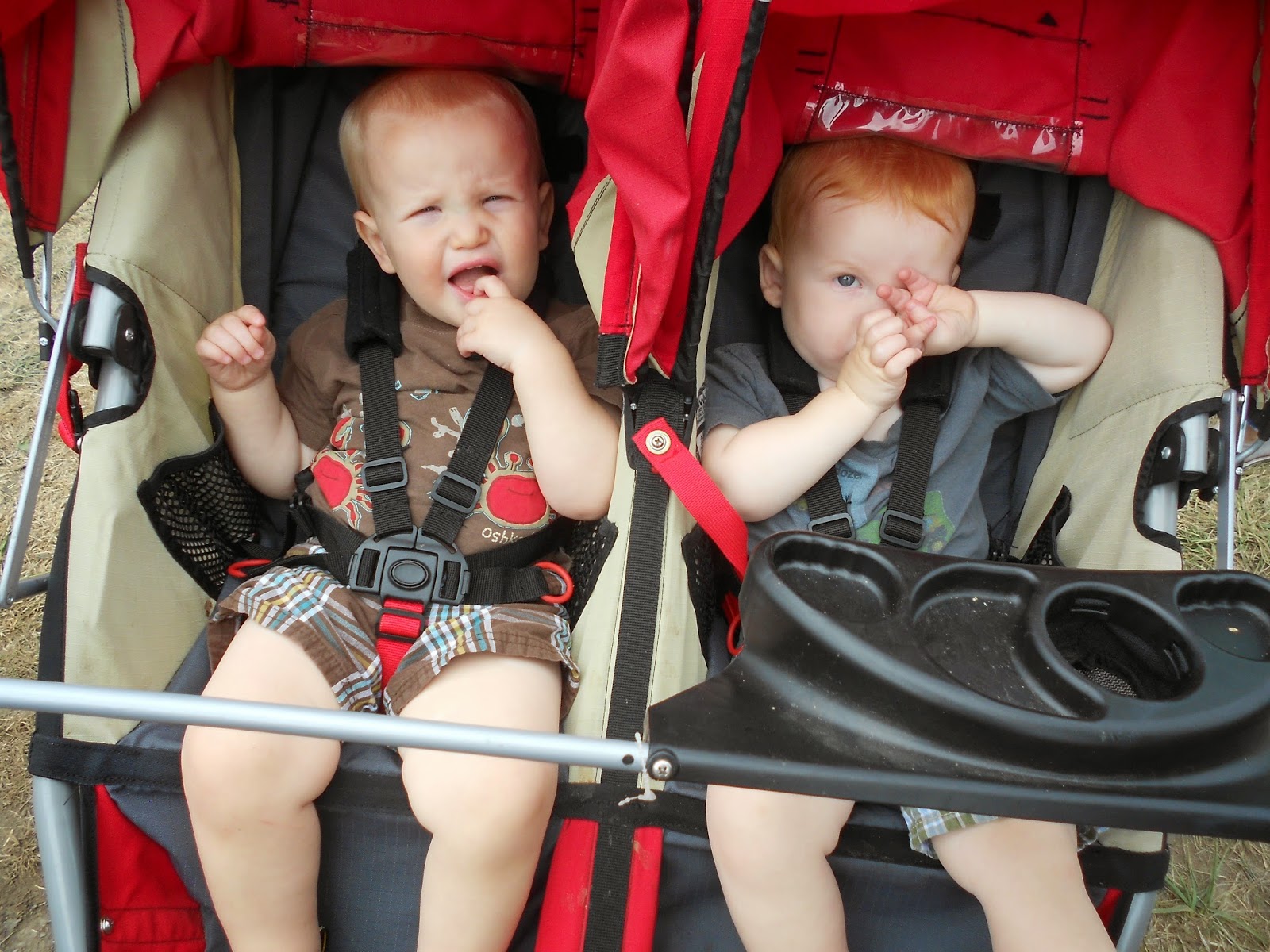 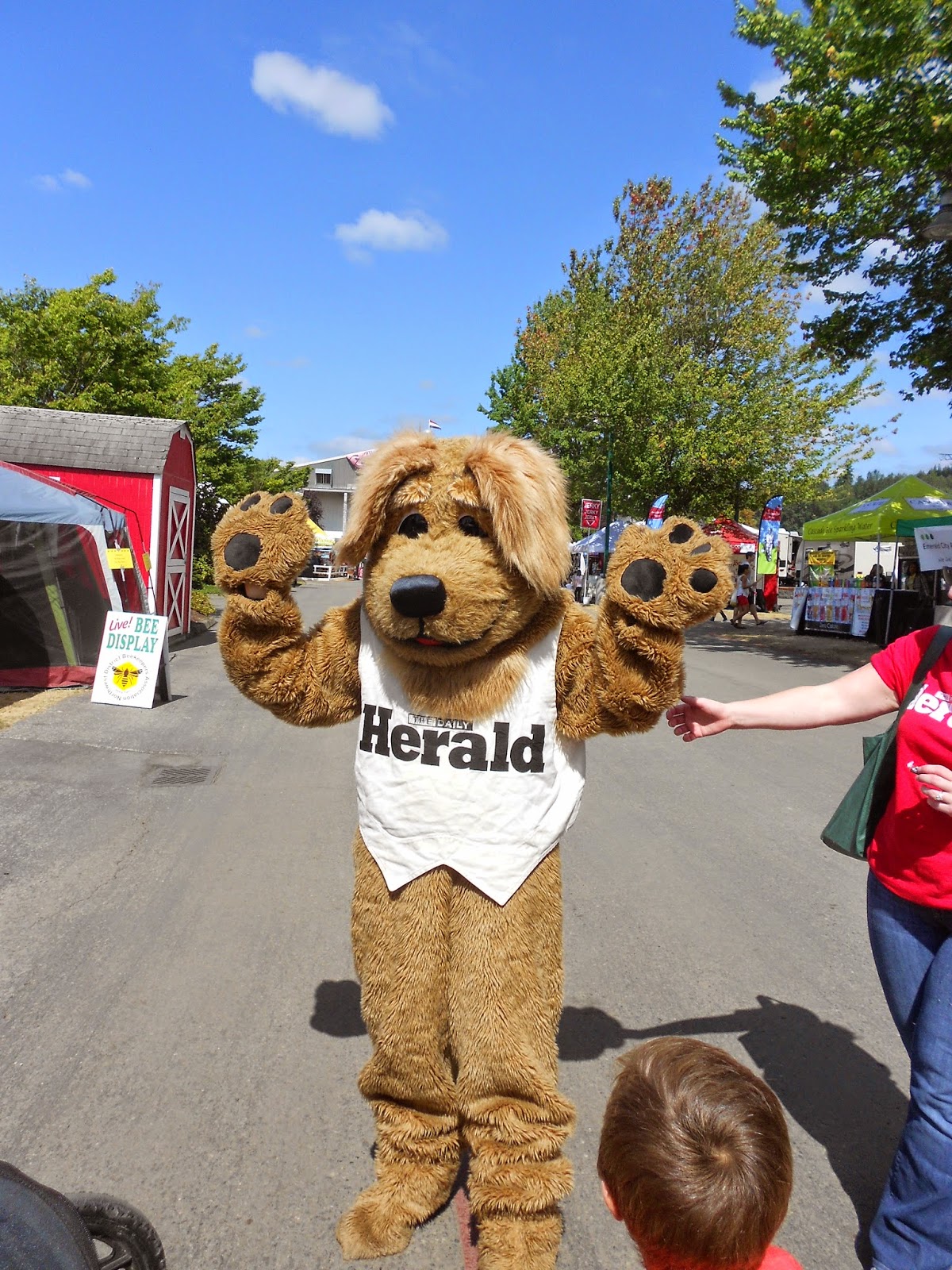 And so the following day I packed my Day at the Fair alongside my new stash of Seattle memories in my suitcase, said some emotional good-byes and flew home.

But I'm already thinking about the next trip.

You see Seattle-A turns 40 next year...and you know how I love a birthday!